Every morning, I roll over to find a tiny body lying between my husband and me. Sometimes I remember how he got there. Sometimes it’s as if he magically appeared. But you can count on my three-year-old to climb into our bed, wiggle over my body, and scoot himself under the covers at some point during the night.

Some nights when I’ve just laid my head down, before I’ve even begun thinking of all the things I need to do the next day (or the things I forgot to do that day), I hear the swishing of his pajama pants across the tile floor occasionally accompanied by a crash or two into a wall as he makes his way to us in a stupor. He pushes the door open, his eyes cracked like he’s been punched in the face, his bedhead on point, and whispers, “I’m sca-yed. Can I way wiv you?”

I know it’s just gotten to be a habit, and I know all the good moms out there would tell me I need to break it before it gets out of hand (#toolatebro). But he’s my last one. And there’s something about him knowing that when he’s scared, he knows exactly where to go to feel safe.

I was thinking about it one night, while he lie next to me. He had just crawled in, yet was already asleep. It was as if he was never really awake at all.

He knows that path well now, the one from his room to ours, because in the not-so-scary daylight he’s walked it over and over again. He’s worn a path to our room because he’s come here often. Not always because he needed something, but just because he loves to be near us.

But it hasn’t always been that way. When we first moved to this house last year, he would just cry in his room until we came to him (which always took a little longer because #mamastired and #dadddyhasselectivehearing). He wasn’t comfortable with the layout of the house yet, hadn’t raced screaming through the halls a million times yet. It was uncharted territory. So he didn’t know the way.

But now, he does. 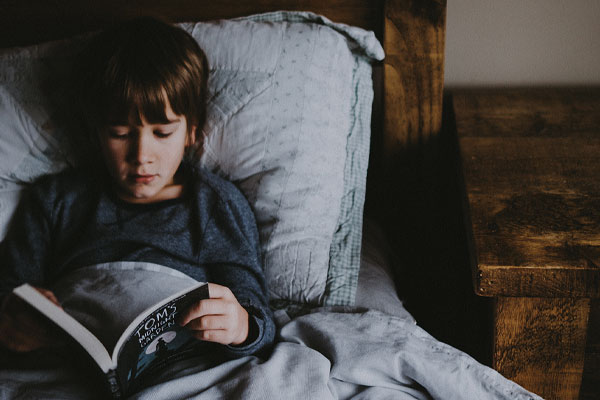 So at night, when he needs us, he follows that beaten path to our room. He knows all the turns, all the walls, all the furniture he needs to avoid.

Even in the dark.

Even when his eyes are half-open.

Even when his brain is still snoozing away.

It’s muscle memory. His feet just take him where they know he needs to be because he’s been there a thousand times before. It’s the place his little feet associate with security and comfort.

I wonder if I have worn a path to my Heavenly Father like he has to us. Do I go to him often enough in the daytime, in the still, quiet, joyful moments, for my feet to blindly lead me there in the darkness? Or would I have a hard time finding him when I needed him because I hadn’t visited in a while?

Of course God will meet us in our darkness. Of course he’ll be there, waiting for us. He’s longing to hold us and carry us and lead us. But if we haven’t worn down that road to him, if we haven’t walked it day in and day out, we might have a harder time getting there. We might run into a few walls, stub our toes on a few door frames, hit our head against a lamp or two, before our weary bodies finally collapse into his waiting arms.

I thought of all the times I’d neglected to walk that path to just spend time with my Father. How I’d waited until I needed him, until circumstances turned desperate and out of control, to stumble my way around searching for Him. He was there all along, in the same place he’d always been. I’d just forgotten the path because I hadn’t been walking it every day.

But the good news is we serve a God who sees us stuck in the corner banging our head against the wall in our lostness and throws down everything, turns his back on whatever he’s doing, and sprints to us. Not out of frustration or disappointment but in JOY and COMPASSION. “But while he was still a long way off, his father saw him and was filled with compassion for him; he ran to his son, threw his arms around him and kissed him.” (Matthew 15:19)

I’m thankful for a son who knows how to find me even in the pitch dark with his eyes half-open. I’m thankful he knows how much I love him. And I’m thankful for the way the Lord teaches me about his character through the pitter patter of his little feet. I pray that I will grow to understand the heights and depths and lengths of his love for me.

From Swarming Bees to Spreading the Gospel